We're Getting Mutants in the MCU - The Loop

Princess Morbucks is a secondary villain. She is voiced by Jennifer Hale.

She is one of the many pupils in Antagonistan's school.

come from: The Powerpuff girls 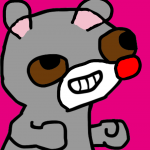